Much to my delight, a week of walking around Washington meant Mr F&P and I could enjoy some seriously good burgers and shakes and not feel in the least bit guilty.

Friends advised us that there was only one place to get the best burger (take away style) in DC, and that was at Five Guys. So after a trip to the International Spy Museum (a must for Bond fans) we went in search the nearest Five Guys to our apartment in Columbia Heights. These places are a bit like Starbucks in that we didn’t need to go very far to find one. So what’s the deal? Basically you get a burger (plain, with bacon, cheese, or bacon and cheese…) with pretty much anything you want. A burger with “the works” comes in at just under 7$ so it’s cheap as chips. 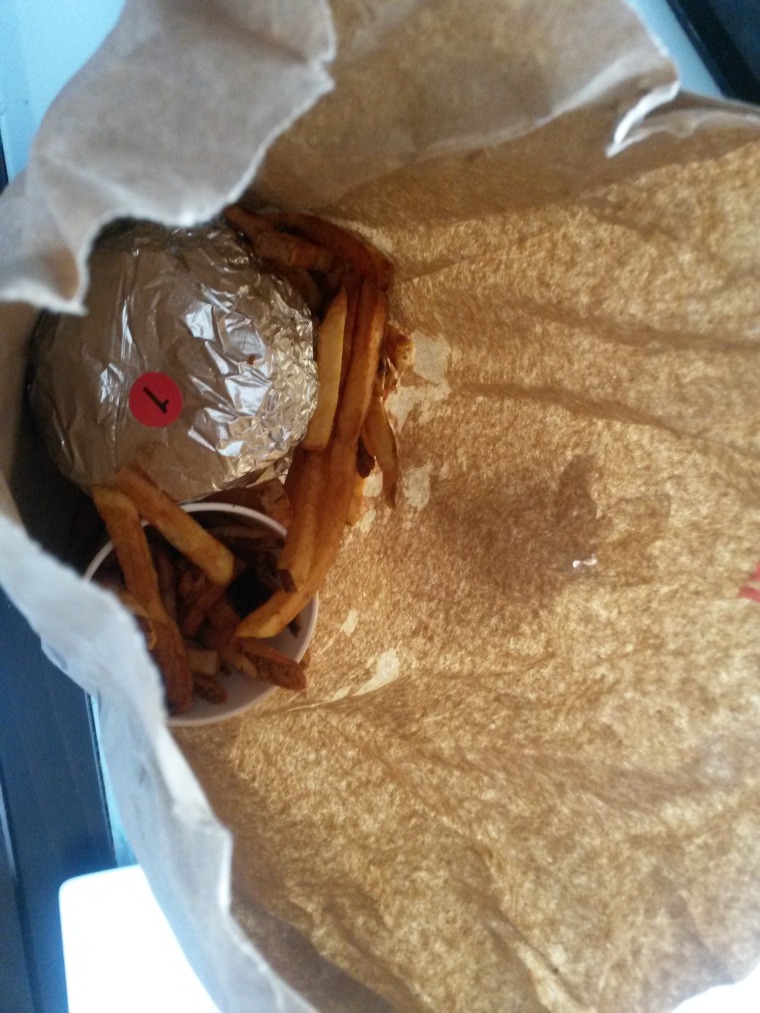 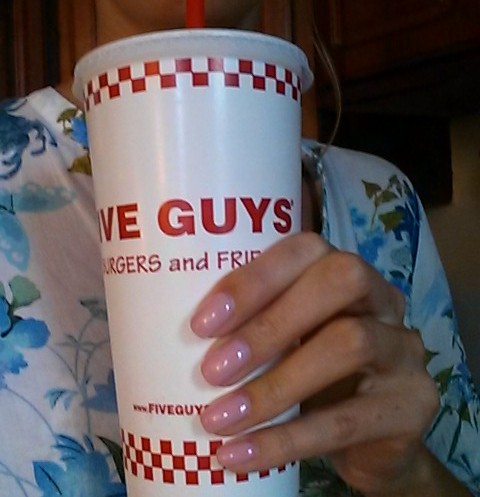 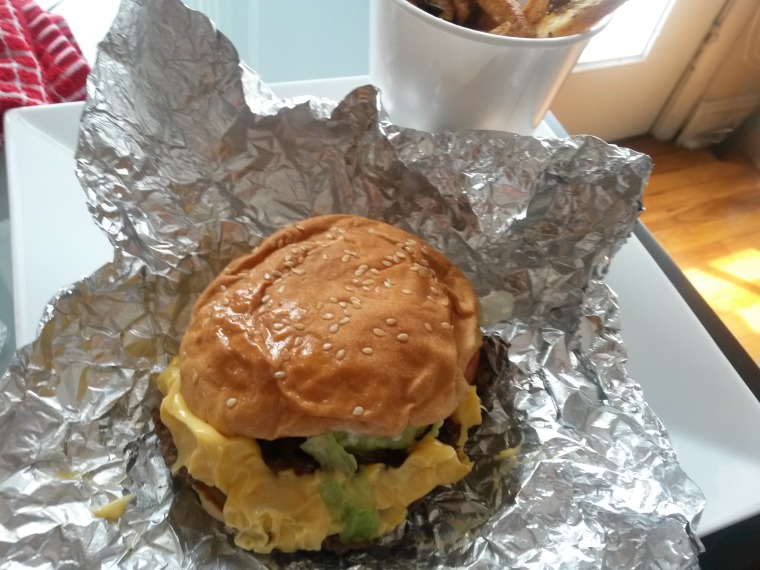 Yup, that’s two burger patties and some of that sliced packet cheese Americans love putting on everything. I was definitely in the mood for a burger, and this one was totally delicious. The fries were tasty too, not too salty and they leave the skins on giving them a much more home cut feel than our skinny take away fries.

Ok, now lets shake things up over at the The Diner. Clearly we like a bit of symmetry to our trips as this was our first and last foodie stop in DC. My Lonely Planet Guide had pitched The Diner as a great place for some late night munchies, or an awesome weekend breakfast. Whatever time you go, you have to get one of these shakes… topped with whipped cream they are deliciously decadent. This one is a honey badger – vanilla, banana and honey.

Wondering what the silver cup next to it is? I was too, it’s the rest of the milkshake that won’t fit into the glass! We also tried chocolate and strawberry shakes, both worthy of the extra shake.

And finally, time for some Nats Dogs – hot dogs at a Nationals baseball game. On our final Friday evening in DC we headed to the Nationals Park to watch the city’s baseball team play the Atlanta Braves. I’ll be the first to admit I know nothing about baseball, but with the way the Americans put on a sporting event, it really doesn’t matter. In the States a night out at the baseball is just that – an entire evenings entertainment. We wanted to do things properly so pitched up at the Bull Pen for some pre-game drinks in the sun. 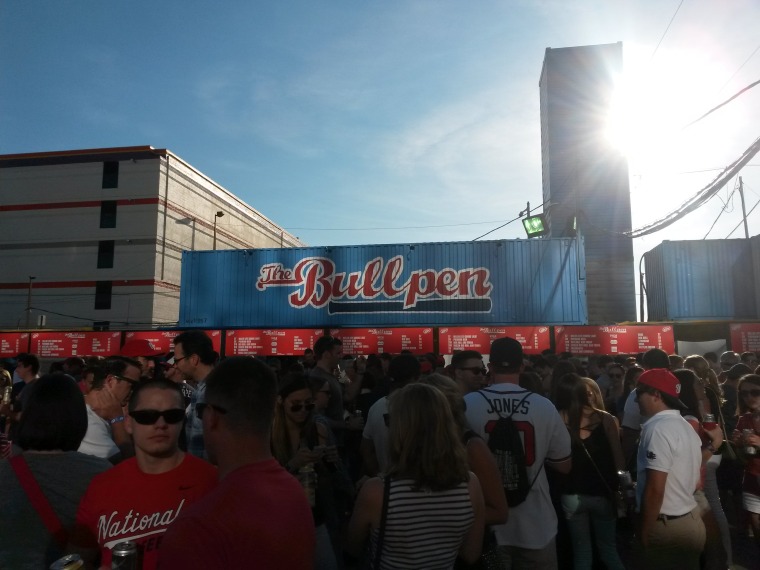 There was a live band playing and the place was buzzing. Unlike rugby or football matches at home, the crowd was really mixed, groups of guys and girls, families and older couples all soaking up the atmosphere. We headed over to the stadium to make sure we were in time to hear the national anthem and see the first pitch being thrown.

Much to my delight, the first 1500 fans through the turnstiles got given these cups (I LOVE a freebie!). EVERYONE was wearing Nationals t-shirts (even Mr F&P!) so I was chuffed to have some memorabilia to take away with me. 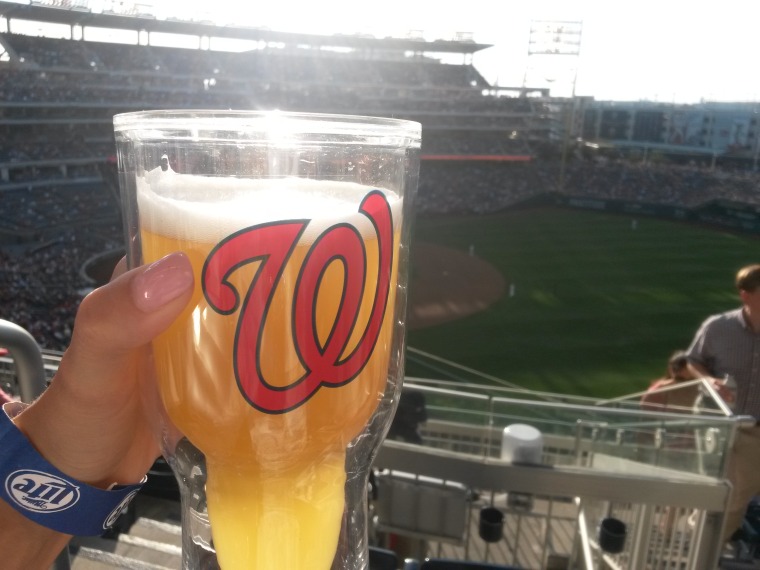 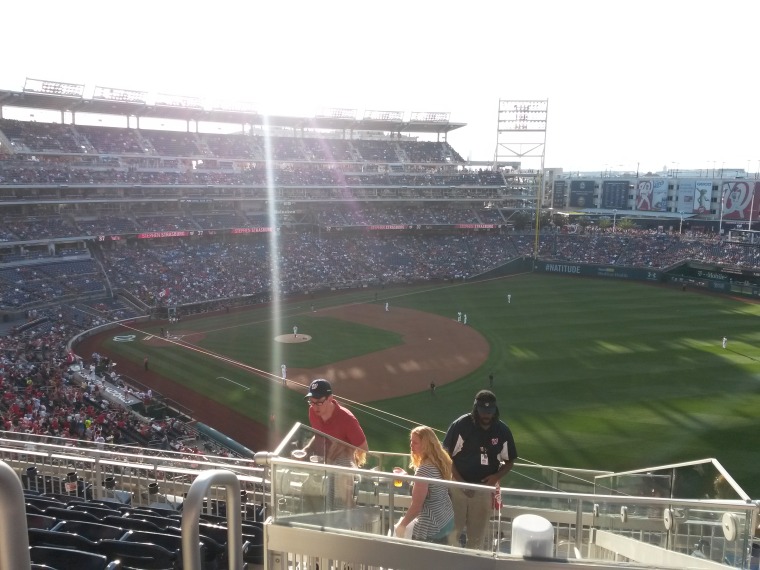 Once we’d established where our seats were and the game got underway, it was hot dog time. The funny thing about American sports games is that everyone wanders about, even once the game as started. The lines at the food stalls are busy from the moment the stadium opens to the last pitch, and no one is in the least bit bothered by people getting up and down from their seats.

Nats dogs in hand, we headed to the DIY sauce stands. Having never seen these before I got a bit overly excited. 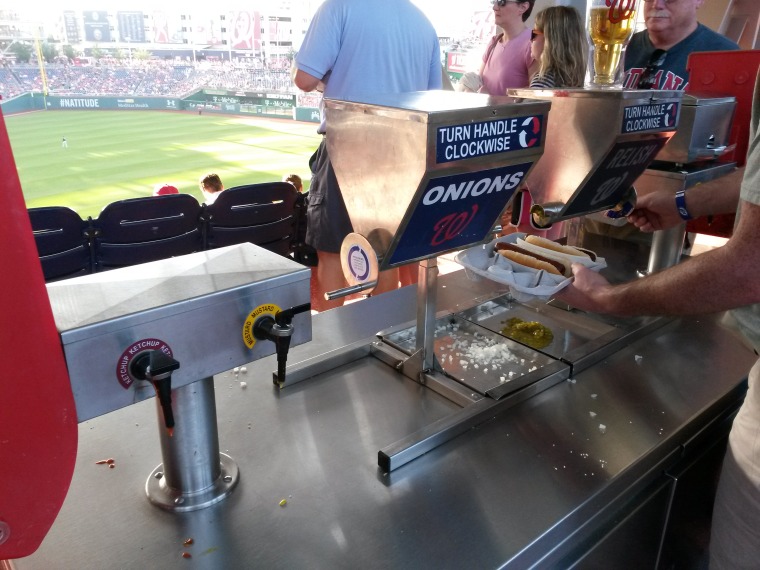 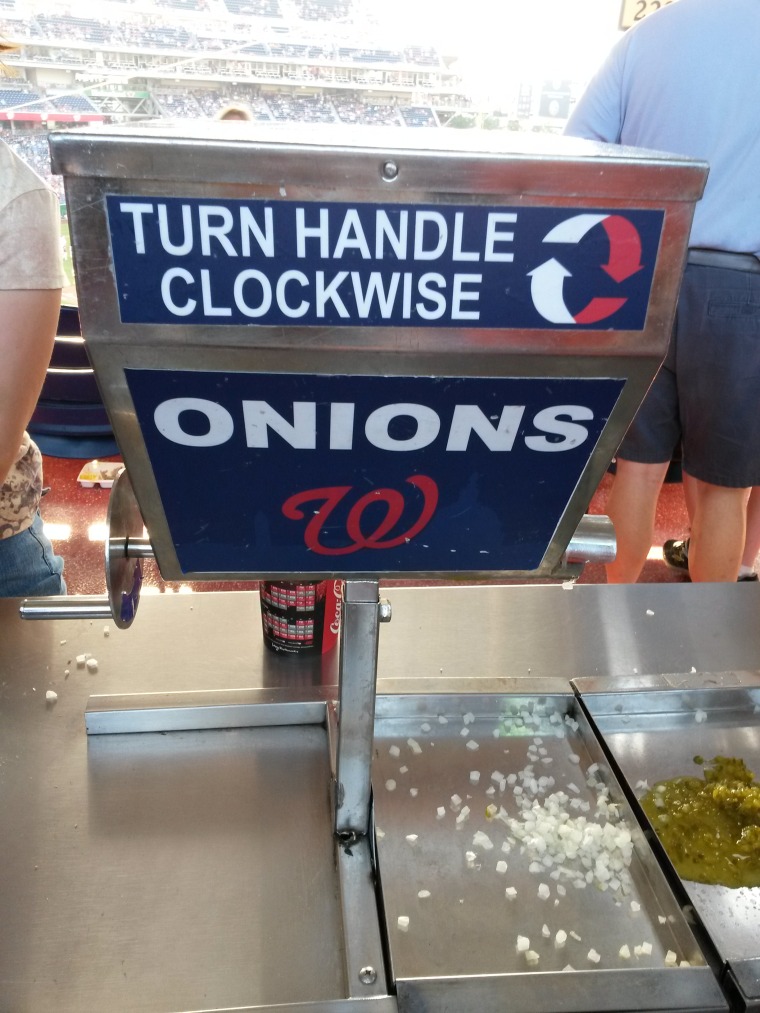 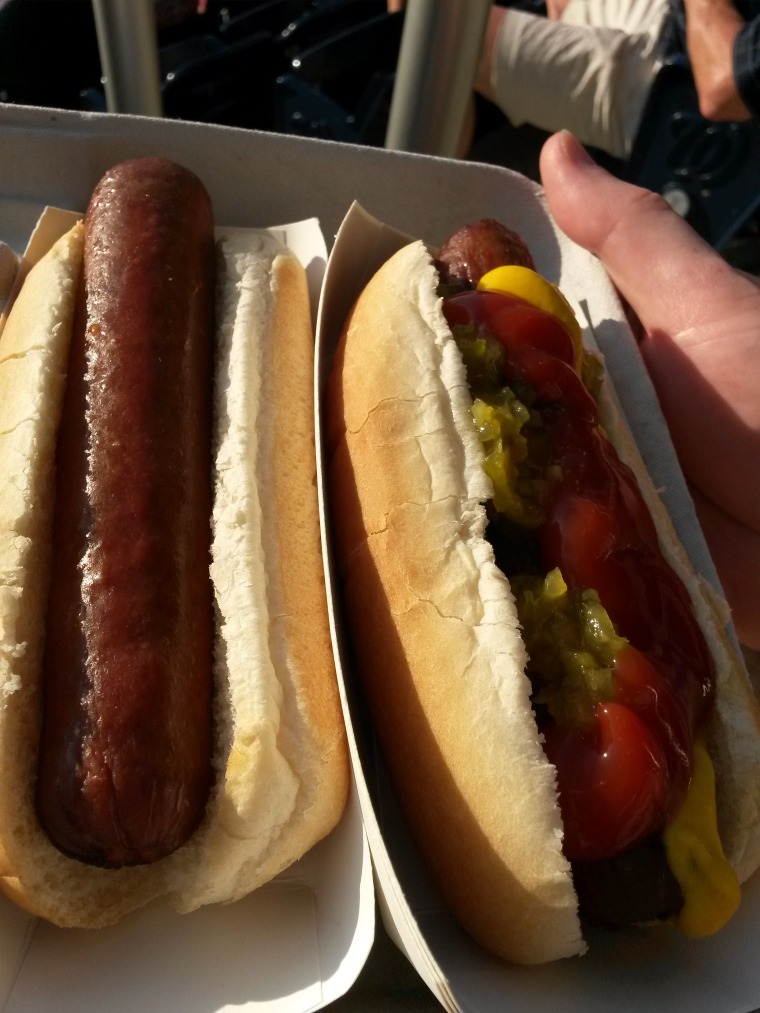 And whilst we were up I topped my Nationals cup up with some summer shandy. 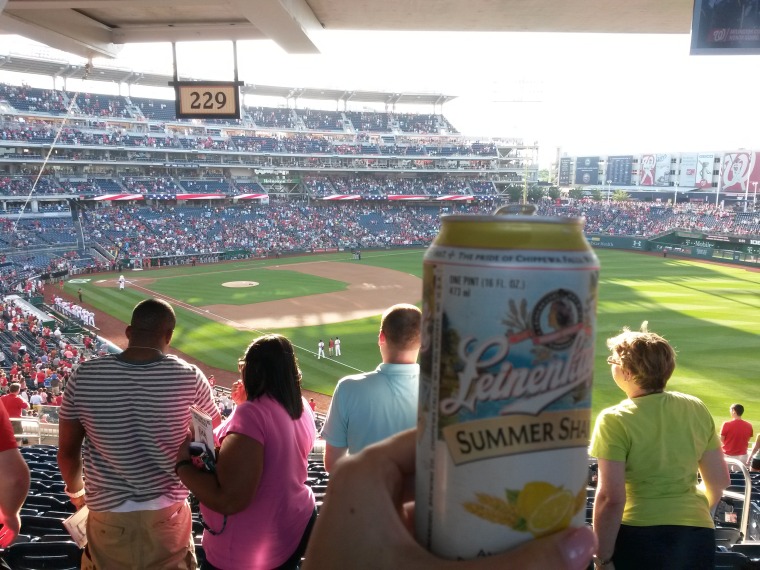 Mr F&P was able to give me enough baseball knowledge to vaguely follow what was happening, but more than anything I simply enjoyed being there, people watching and soaking it all up. In between innings (that’s a baseball reference right there) there was some entertainment including a “Presidents Race” – people dressed as President mascots with giant, comical heads racing round the pitch, t-shirts being thrown into the lower stands, and a fan man who from time to from popped up and started a chant to get everyone going. 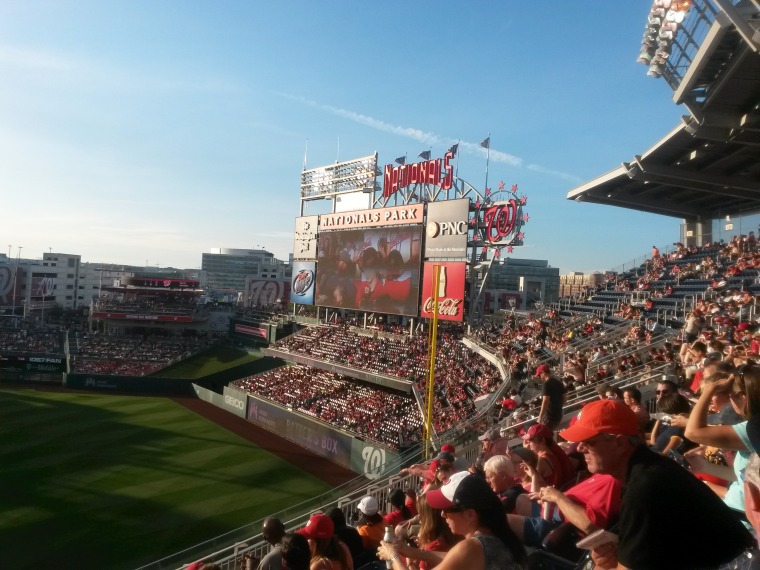 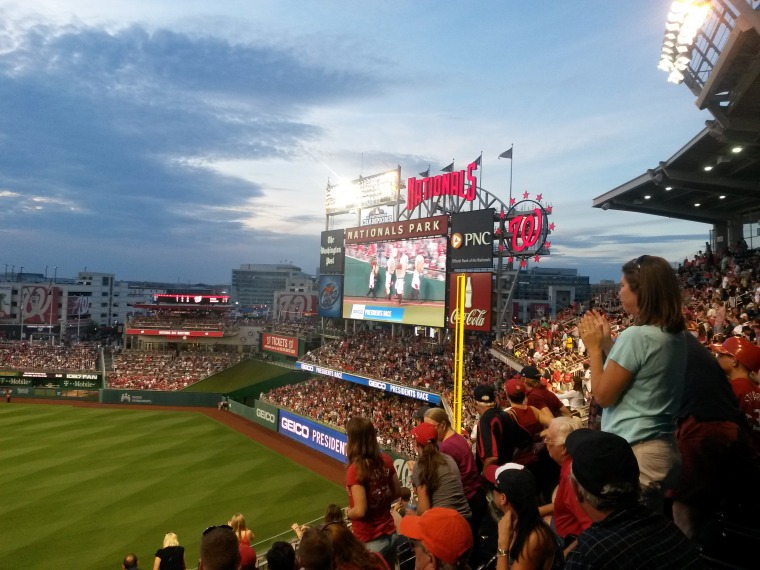 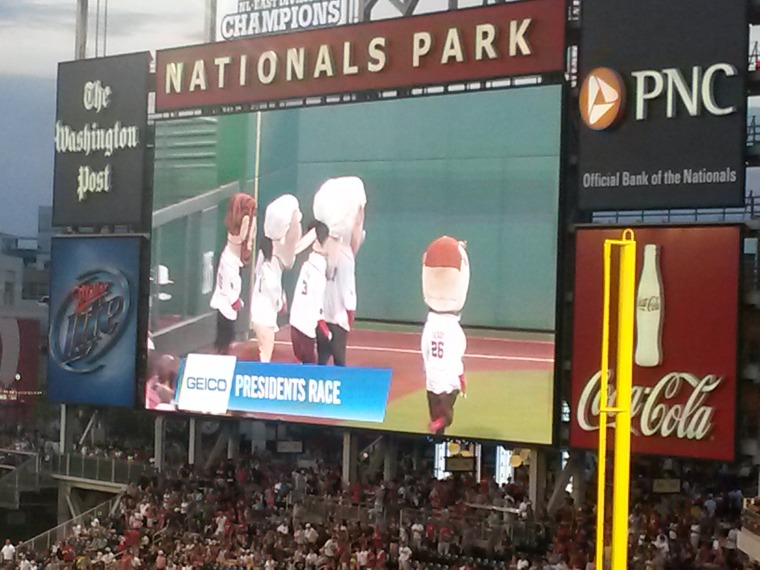 Stuffed, happy and all cheered out our night, and the baseball match was drawing to a close. Unfortunately on this evening the Nationals lost 6-4, and I have to admit I’m really no wiser to the rules of the game. However getting me to voluntarily spend the best part of 4 hours at a sporting event is impressive, so I say well done Nationals, and if I lived in DC I’d be a big fan!

Strike. A. Pose.
Tuesday ✌🏼
Rainy day 💙
❤️ C U T I E • P I E ❤️
A little poem for all the new mummies and daddies 🎅🏼🥰 #firstchristmas #feelingfestive
Follow Fizz and Pheasant on WordPress.com