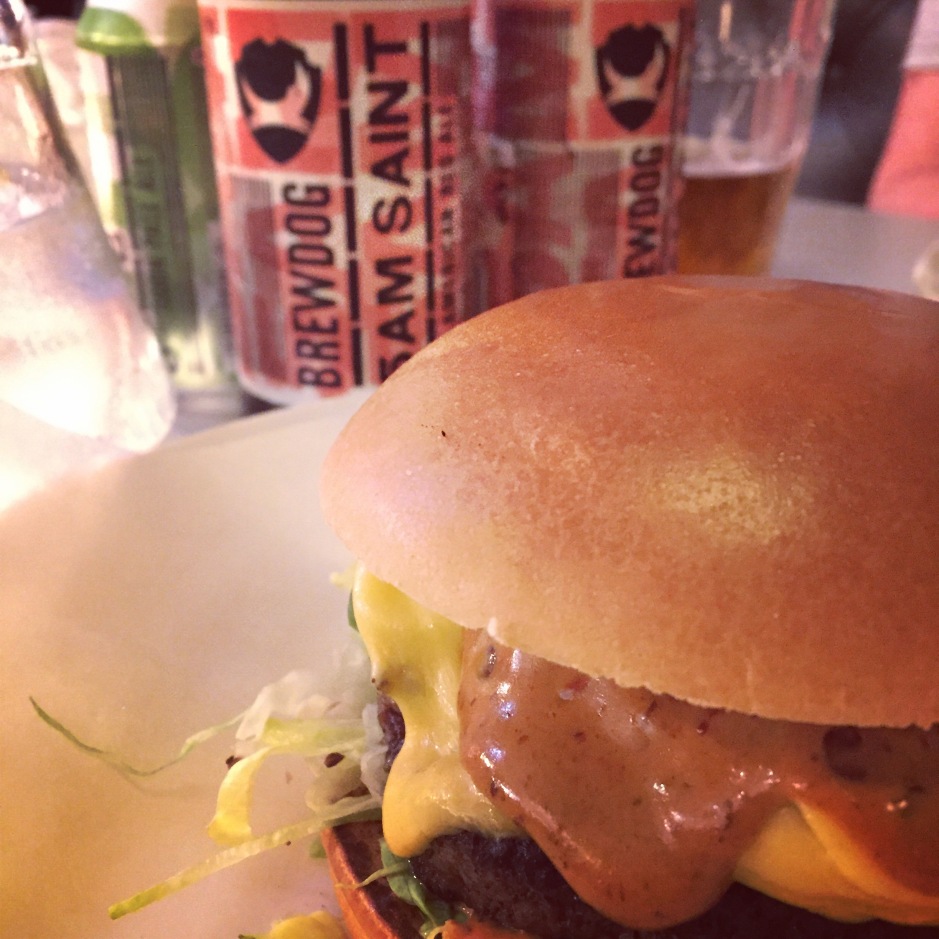 For a while it felt like every new restaurant opening up in Edinburgh was doing Thai food, and now it seems we’ve moved on to burgers. Burgers and Beers, Bread Meets Bread, just Burger or maybe even just Bun… I’m not sure, it’s quite confusing!

Each one claims to have the best burgers in town, and whilst a burger might seem simple task, as we all know, simple food needs to be done incredibly well to pack a punch.

I recently had the pleasure of popping along to Lothian Road’s newest contender, Byron Burgers. Here they promise proper, American style, hamburgers. We spent the evening in the company of the Byron team, assisted by partners in crime, BrewDog, to find out all about this newest venture.

Byron was founded by Tom Byng in 2007 with the mission of serving proper hamburgers like those he remembered fondly from his college days in the States – made from four cuts of properly sourced British beef, ground fresh and served in a squishy bun with minimum fuss and fanfare.

The menu at Byron, created by Head Chef Fred Smith, keeps thing simple with a range of burgers, classic sides and homemade desserts, plus a regularly-changing special hamburger – at the moment a football inspired burger called the Byronaldo.

For BrewDog, this was the perfect partnership. They are passionate about two things, great beer and great people, and they saw the opportunity to work with an exceptional team of young, hungry and, most importantly, passionate people at Byron. Like themselves, Byron focus on keeping everything simple and executing it perfectly.

The press tasting menu for #beeratbyron was impressive. We kicked off with some with some sticky Buffalo Chicken Wings, served with an incredibly moorish blue cheese dip, and cracked into the first beer of the night, a Byon Pale Ale, designed especially by team at Brewdog for Byron. ‘Hazy, hobby, critus’ it was my favourite beer of the night. Nothing like peaking too soon! 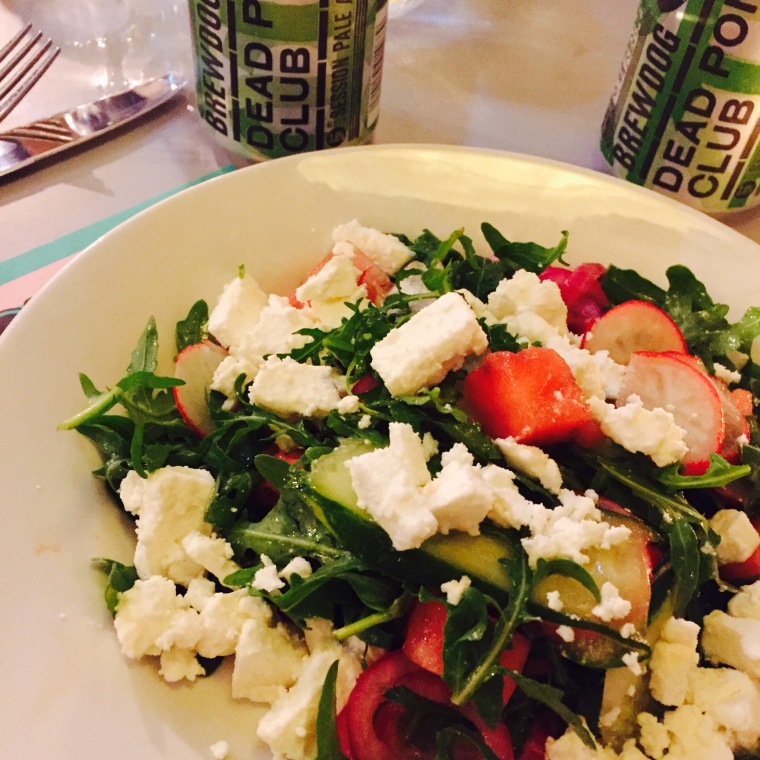 Next up came a fruity Feta & Watermelon Salad, with cucumber, rocket, radish and pickled red onions. It was a lovely palate cleanser, and was matched with Brewdog’s Dead Pony Club – the most popular of their beers I am told.

Of course, it’s really the burgers we wanted to get our hands on and the Smoky and the Chilli didn’t disappoint. A warning, the latter is not for the faint hearted. I enjoy a bit of spice and I couldn’t handle more than bite, but others at our table tucked in.

The Smoky was served with mature cheddar, streaky bacon (nice and snap-able, well done Byron), crispy onions, pickles and smoked BBQ chilli sauce. We washed these down with the Brewdog’s 5AM Saint. 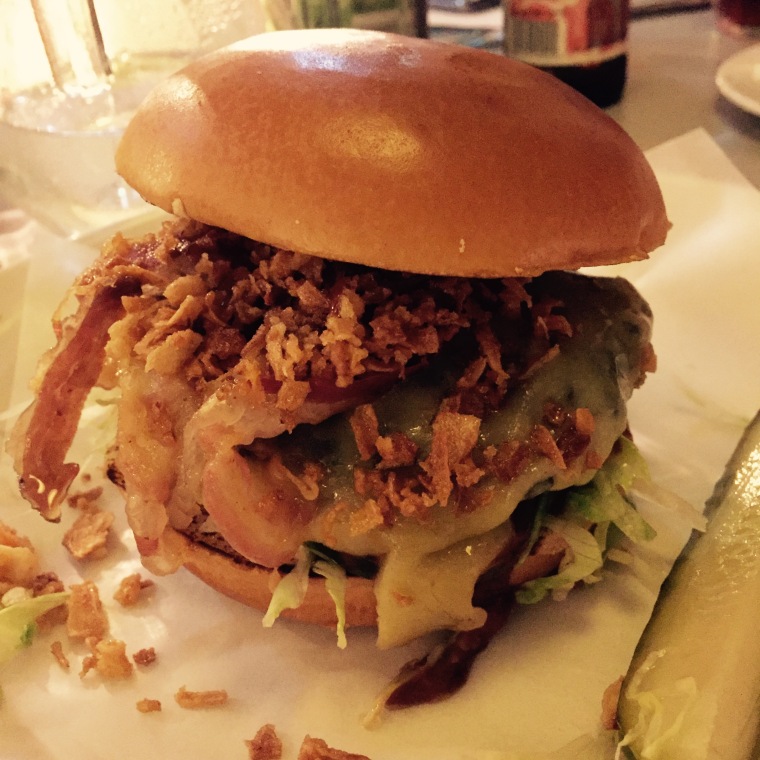 The only dish I was not sold on was a side of Bacon and Cheese Topped Fries. These were smothered with Byron’s trademarked Freddar cheese, their own take on ‘proper American hamburger cheese’. In my mind, it tasted just like that, as though it was from a tube. Caveat: it’s not. It is whipped up fresh in the Byron kitchens, using a couple different types of cheese and cream, but alas, it just didn’t do it for me.

Finally, we sampled their ‘Hard Shakes’ for dessert. If only I had not just feasted upon wings and burgers for the past two hours. I went for a Chocolate Oreo Shake (not yet on the menu but maybe if you ask nicely…) with a shot of bourdon. Served in a proper American stainless steal malt cup, the result was delicious. Melted caramel flavours from the bourbon and what tasted like plenty of chocolatey oreo ice cream. 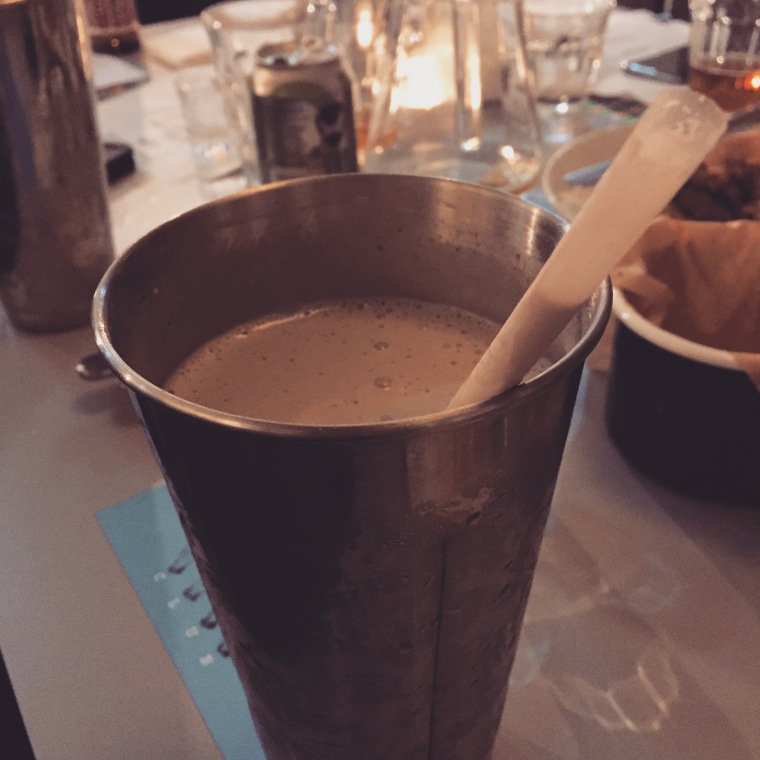 And it seems I am not only one in Edinburgh to enjoy these burgers. Byron on Lothian Road is second restaurant to open up here. Tom Byng, Byron’s founder, says: “We’ve been overwhelmed by the warm welcome we’ve received since opening first Edinburgh restaurant on the corner of North Bridge and the Royal Mile, so we can’t wait to continue welcoming proper hamburger fans through the door at our second restaurant in the capital.”

My only beef (excuse the pun) with burger joints is that they can’t, and shouldn’t, be anything other than super casual. Byron is the sort of place you’d pop in to if you were in the right neck of woods, perhaps grab a bite to eat before or after the cinema – the Odeon is conveniently located across the street. It’s not somewhere I’m going to book in advance, or travel great distances to get to… but that doesn’t mean I won’t get a proper American hamburger when I’m there, it just means it’ll always be an unplanned one.