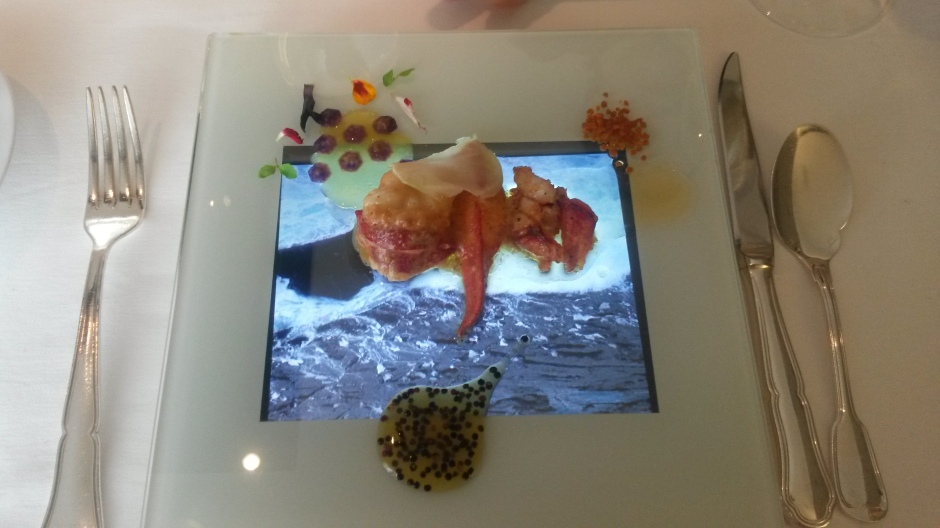 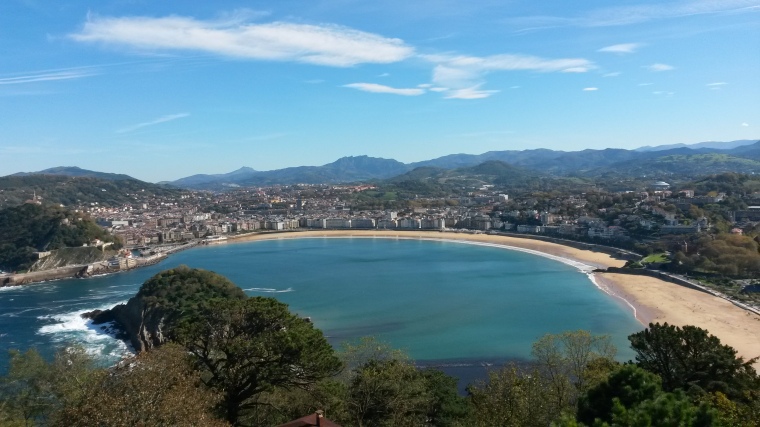 At the end of October last year we spent 7 glorious days eating and drinking our way around San Sebastián in the North of Spain.

With a growing reputation for incredible food, San Sebastián is one of the few places in the world to hold the highest number of Michelin stars per square metre, beaten only by Kyoto in Japan, and well ahead of cities like Paris and Lyon.

On the North East coast of Spain, it has all the charm of an old, Basque city. The old town is a maze of cobbled streets lined with intruiging pintxos bars. There are beautiful cathedrals to explore, a trip up the funicular reveals panoramic views of the bay, and in the summer months the long stretches of beach are teaming with locals, holiday makers and travellers. The sea is always overflowing with surfers. If you’ve not already spent all your pennies on pintxos, the new town also has a range of quirky boutique stores and all the big Spanish brands you’d expect from a thriving, cosmopolitan city.

Our foodie highlight was a trip to Arzak, a 3 Michelin star restaurant run by world renowned Spanish chef and foodie genius, Elena Arzak. As luck would have it, it was just a short stroll up the road of our hotel, so we popped along for lunch one day mid-week. 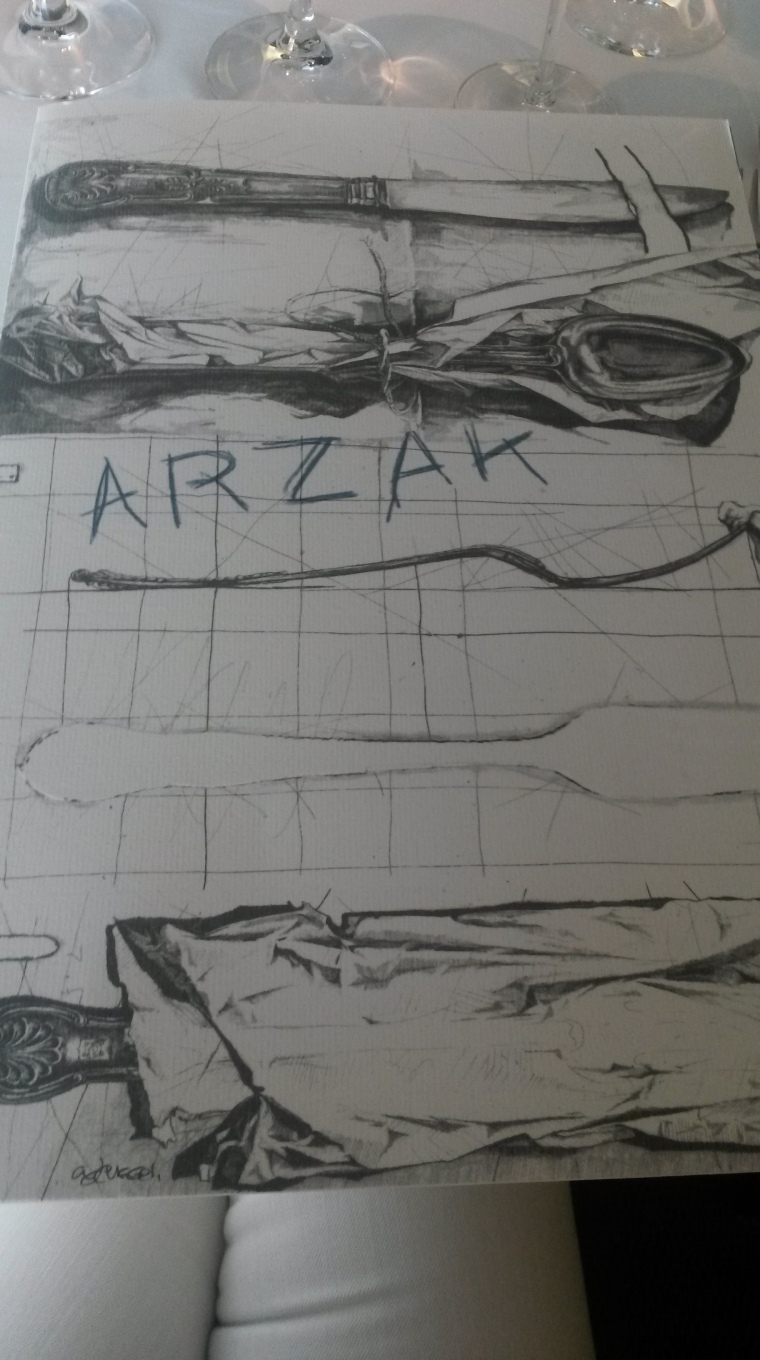 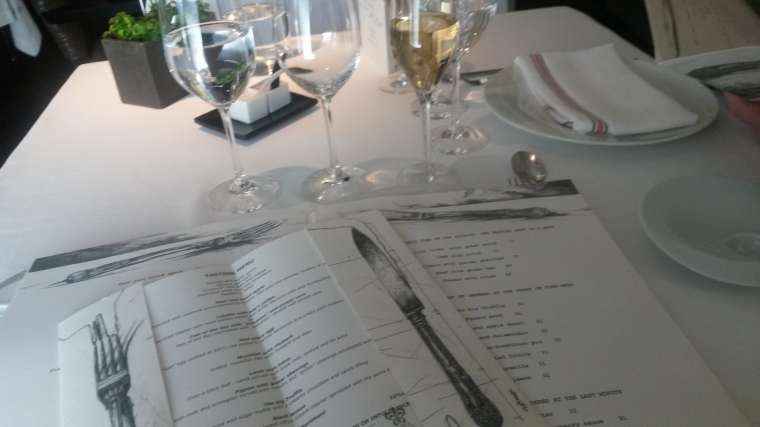 We both opted for the tasting menu, and sat down to enjoy the most innovative meal I have ever experienced. It was a real show; every single course had a ‘wow’ moment. The dishes boasted incredible colours and textures, some of them almost too pretty to eat… but not quite. The flavours and ingredient combinations were fun and surprising, it was a truly exciting experience from start to finish.

Following a glass of Champagne on arrival, the Sommelier recommend a local bottle of white wine followed by a glass of red to accompany the meat course. To start us off, we delved into a selection of appetisers… 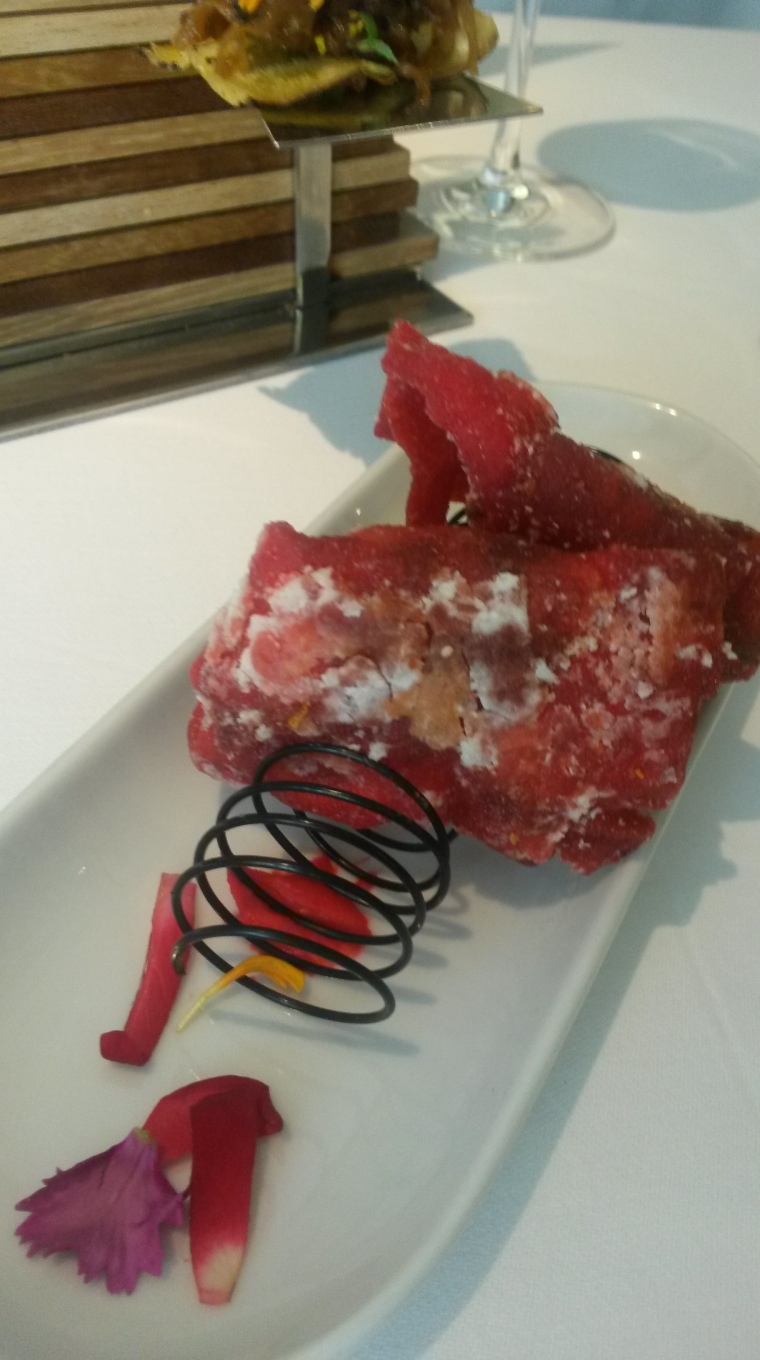 These were followed up by ‘txistorra’ – a type of Basque sausage, flavoured with garlic, salt and paprika – served with with beer and mango – on top of a beer can, obviously! 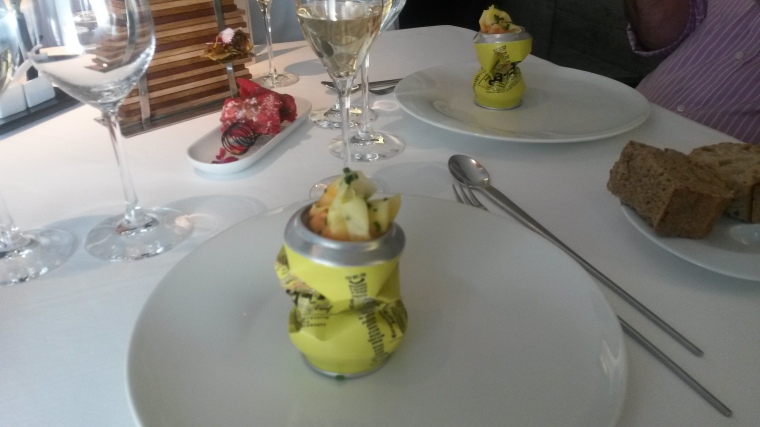 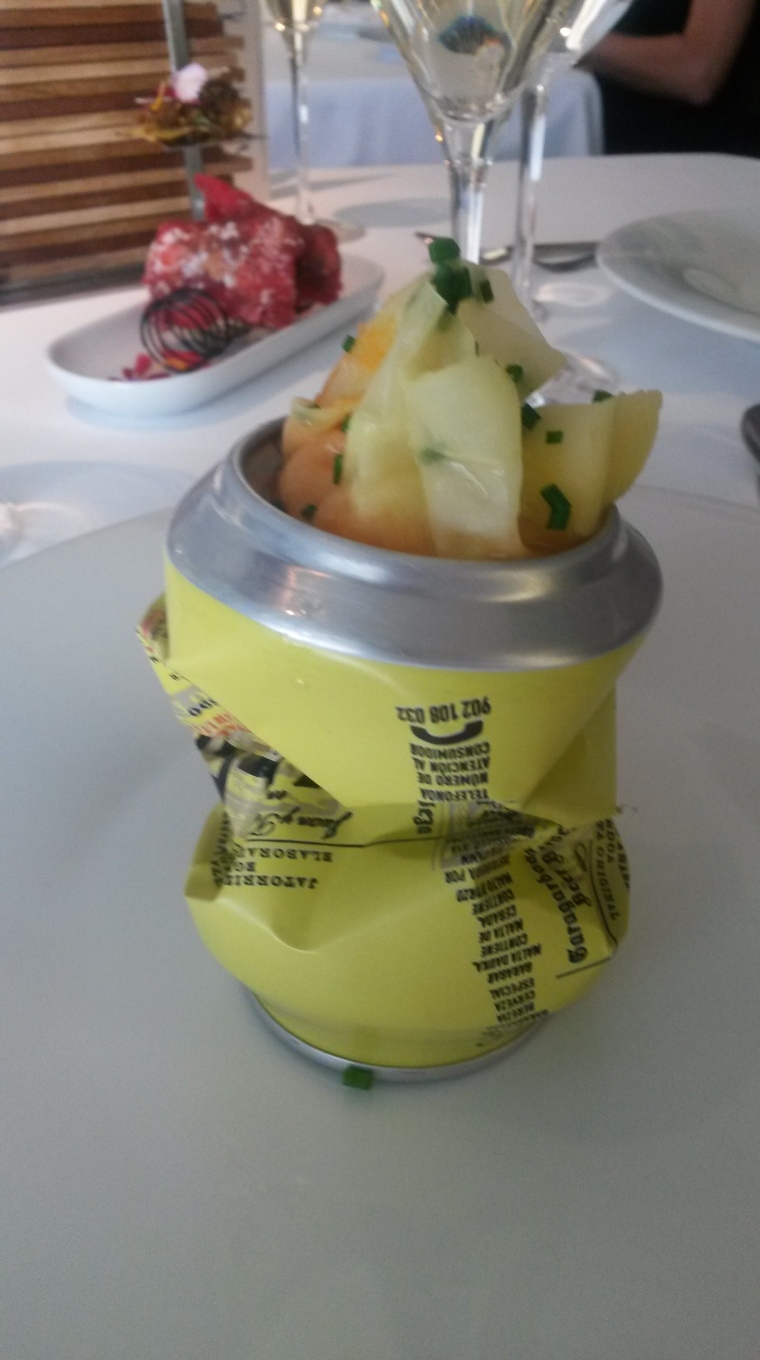 Marinaded white tuna and strawberries on sticks came next, with balsamic dressing and chives. 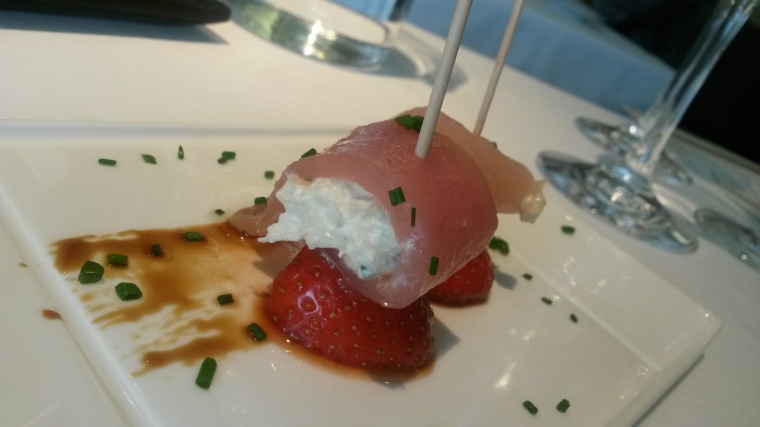 …and a couple of chilled bottles of raspberry bitters, with a stopper made from melon and serrano! 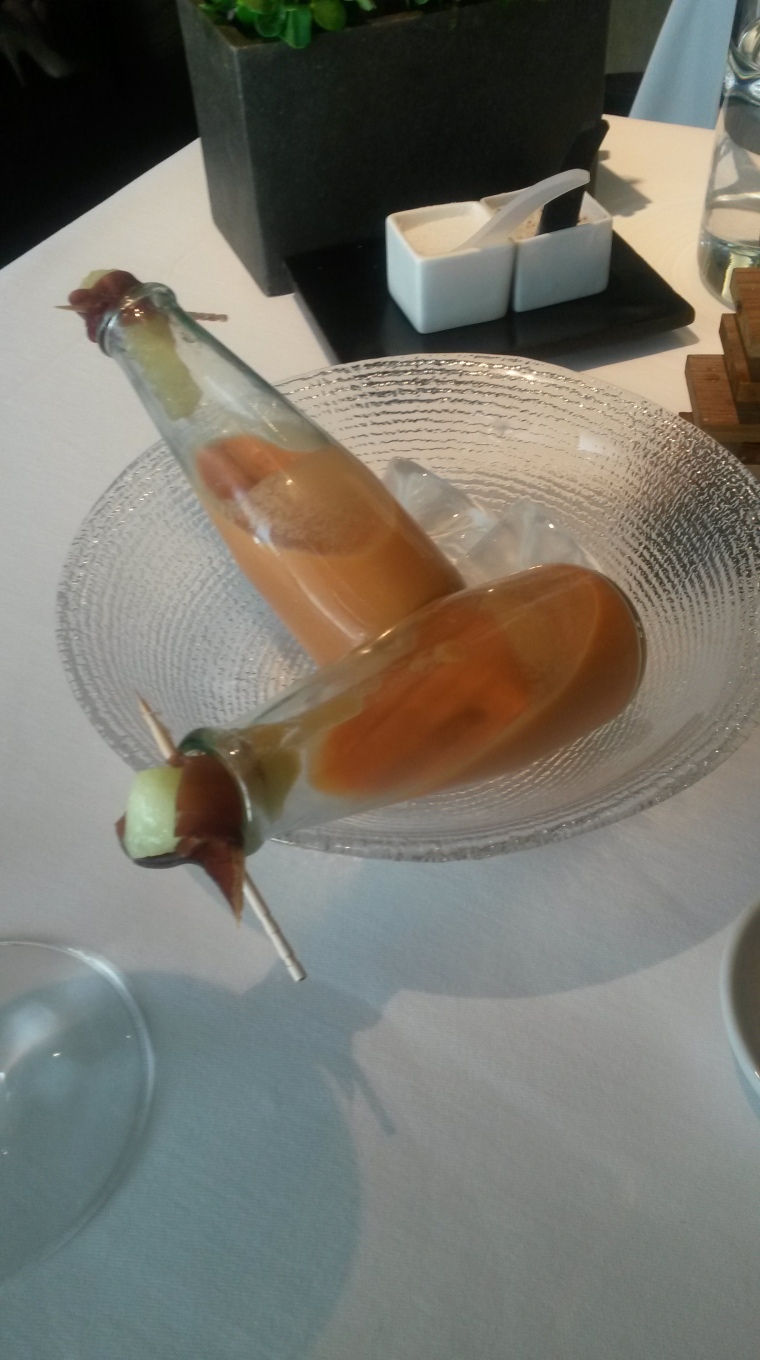 Where on earth this menu going next? I had no idea, but was excited to find out.

The first course was ‘beetroot blood apple’. Another intriguing duo of dishes, quite hard to describe. Two slices of apples, ‘injected’ as the menu says with beetroot, served with two puff potato shells filled with the creamiest foie gras I have never tasted. 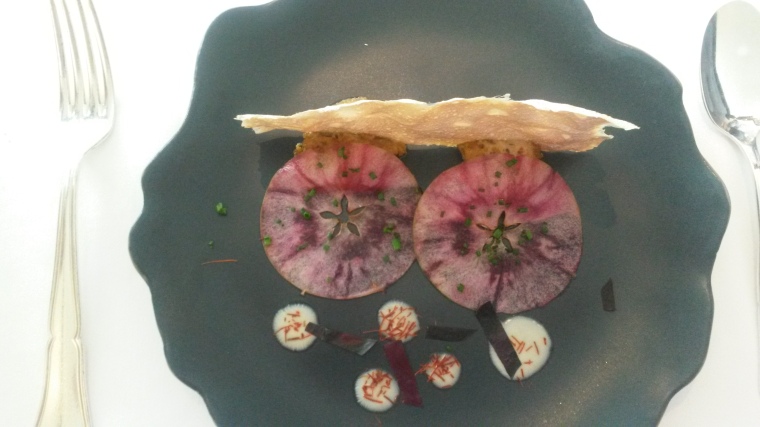 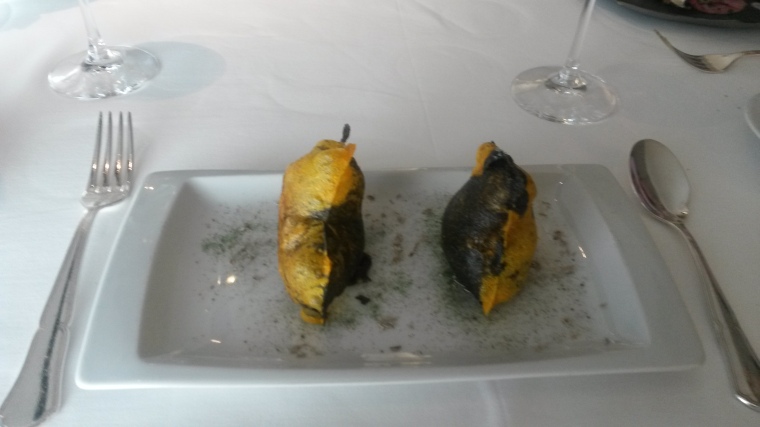 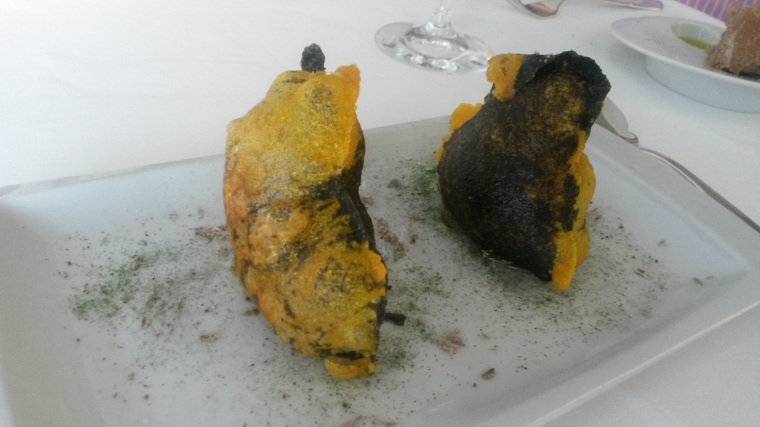 For our second course, we each chose a different dish, keen to make sure we experienced everything Arzak had to offer. Ian’s fish of the day was served with ‘purple corn’ and looked more like contemporary art than food on a plate! 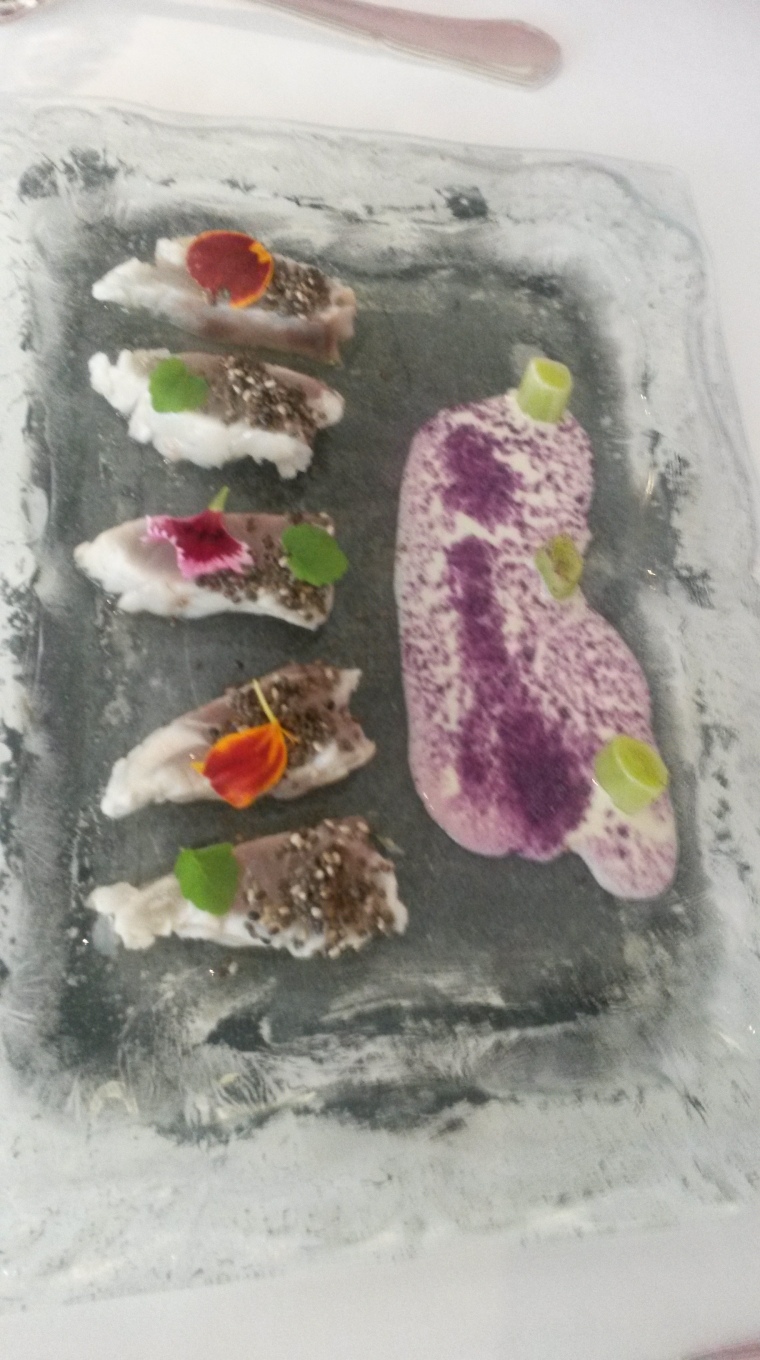 I opted for ‘lobster with bee’s pollen’ which was served on an iPad like screen with a video playing beneath. The impression was outstanding. The waves and noise of the ocean were designed to make you think about the lobster in its natural habitat. Quirky, fun and so, so cool! The lobster was deliciously sweet and the honeycomb crumb and bee’s pollen was a winning combination. 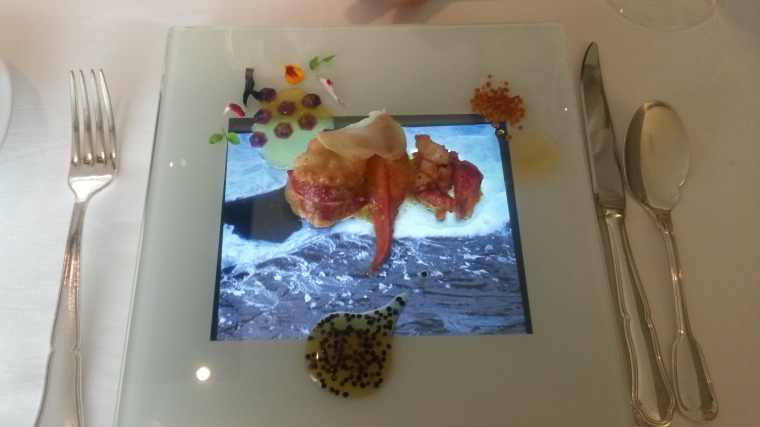 As if that weren’t impressive enough, just as I was finishing the dish, the ocean scene changed to roaring flames…

Up next, the ‘red space egg’ which we had already heard big things about. Eggs are what put this restaurant on the map and the method of poaching eggs in bags is known throughout Spain as ‘Arzak eggs’.

The red egg is the latest addition to the menu, cooked at 65’c, served in the skin of a red pepper accompanied by cereal ferments and crispy pig’s trotters. I was being well and truly pushed outwit my foodie comfort zone, and it was brilliant. Not at all slimy, as I feared when the plate was first placed in front of me, and my new favourite way to enjoy poached eggs…however I’m not sure I’ll find this technique on many a brunch menu, but never mind! 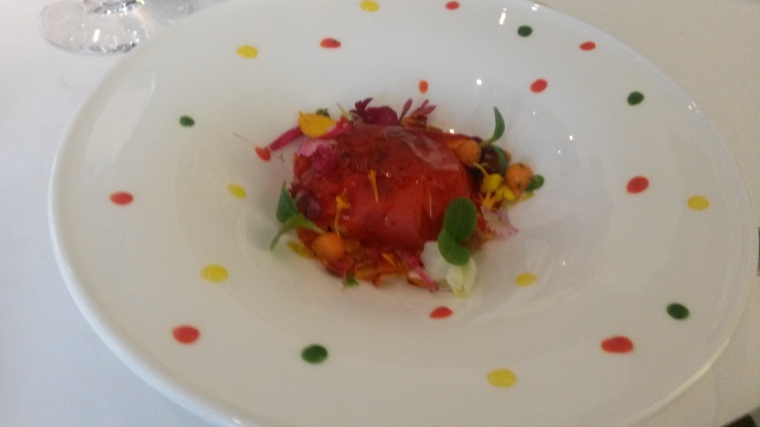 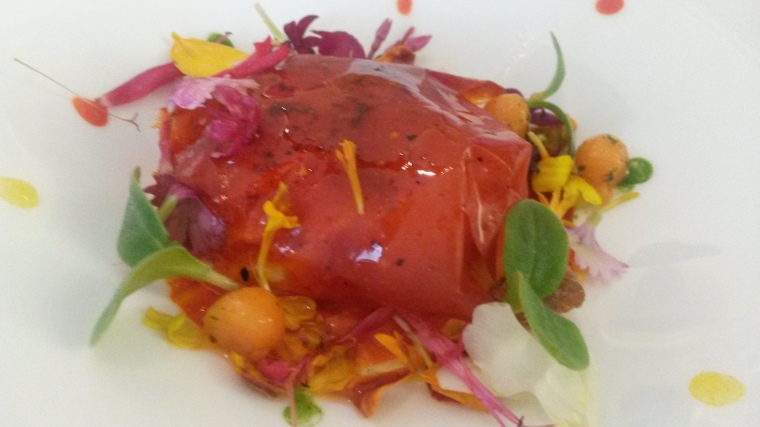 One of my favourite types of fish came next – grilled monkfish fillet, served with rhubarb and lilies. Flowers featured heavily in each and every dish, adding to the elegance of each plate placed in front of us. 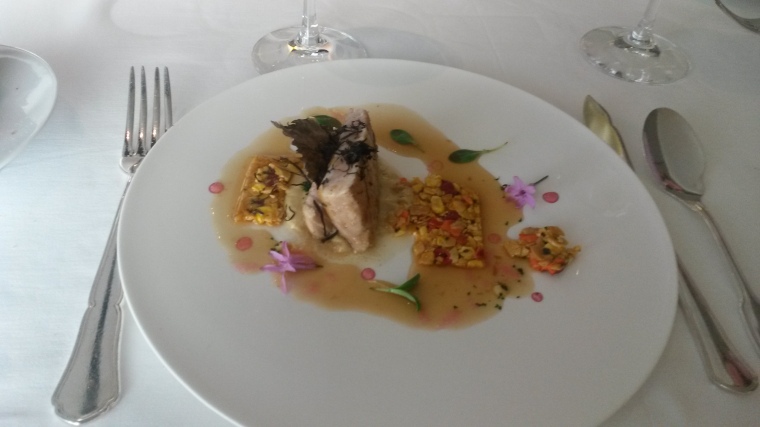 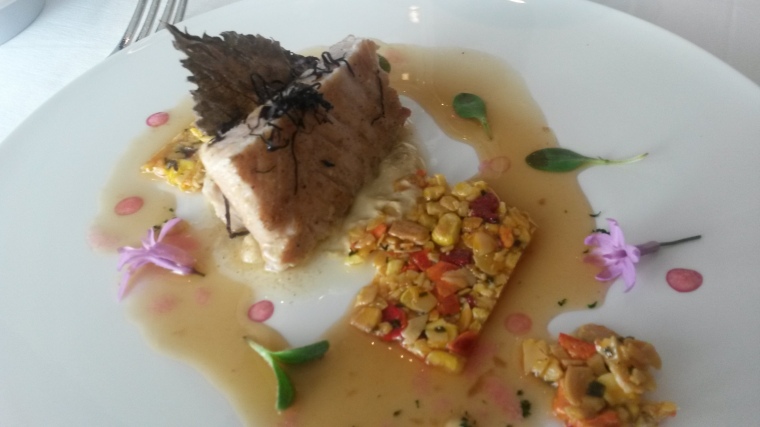 We then went our separate ways once more and Ian enjoyed the lamb served with lotus leaf and quinoa whilst I tucked into the roasted pigeon breast, with nuts and armagnac, served with ‘guitar’ shavings – the side dishes throughout the meal were every bit as impressive as the mains. 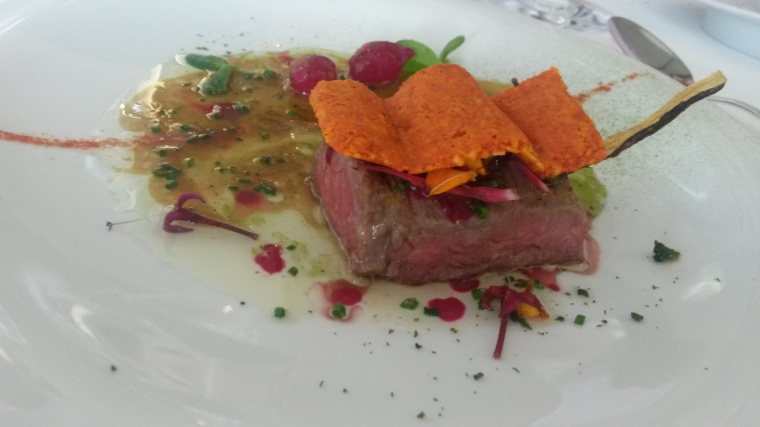 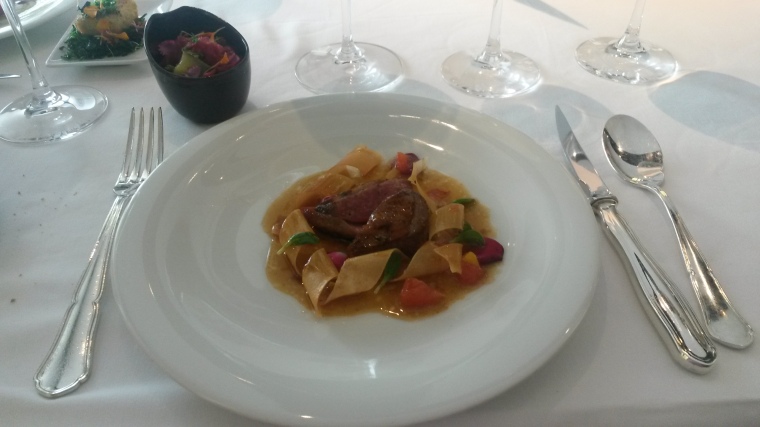 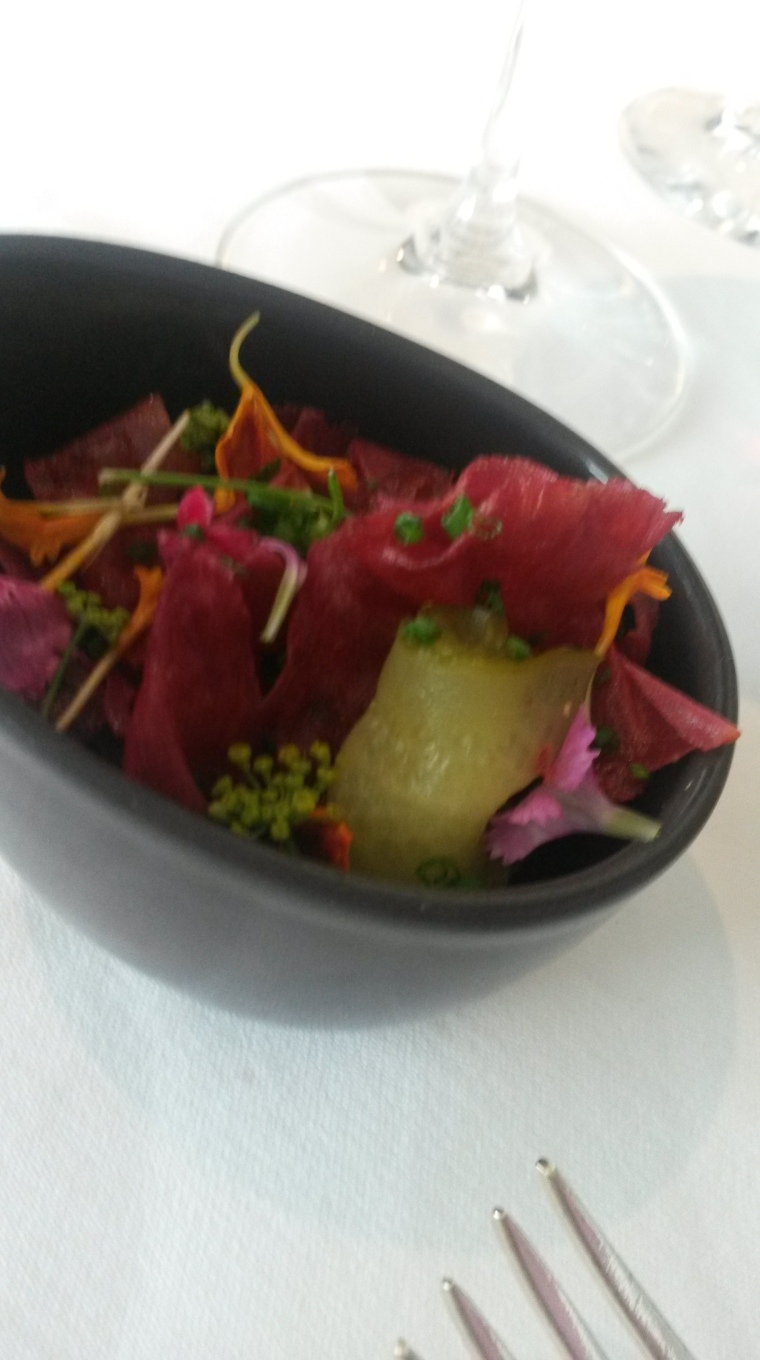 At this point I barely had room for another sip of wine, let alone dessert, however I was glad I didn’t refuse. Another showstopper came in the form of the ‘the big truffle’ – a large cocoa and sugar truffle which melted away as the waiter poured a creamy chocolate sauce over it. These photos do not do the dish justice… 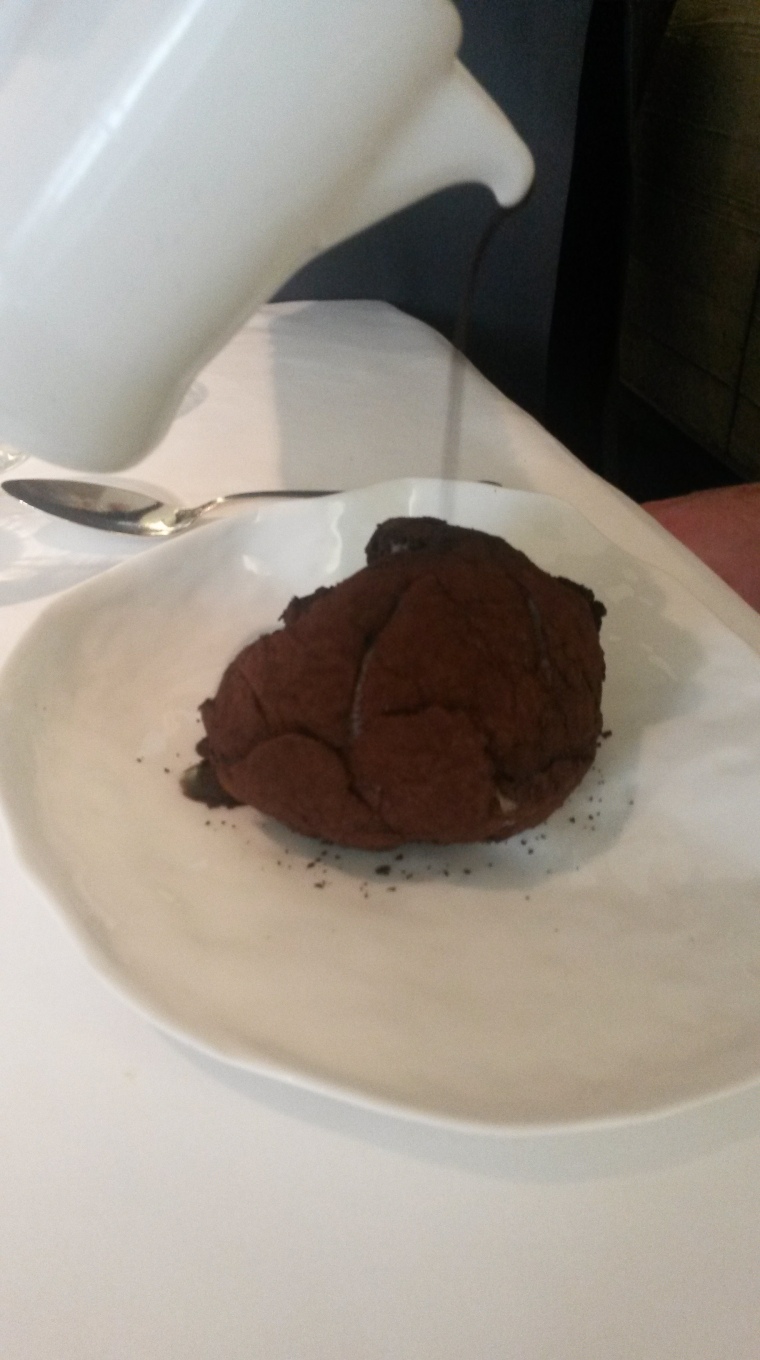 The second dessert was called ‘black lemon’. As I cut into the square a lemon sauce oozed out onto the plate encase in a light and fluffy chocolate mousse. A little too citrus-y for my taste, we swapped plates and I devoured what was left of the chocolate truffle. 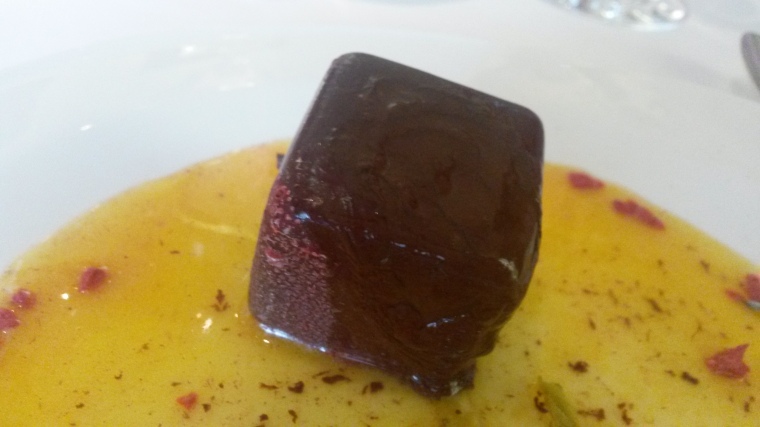 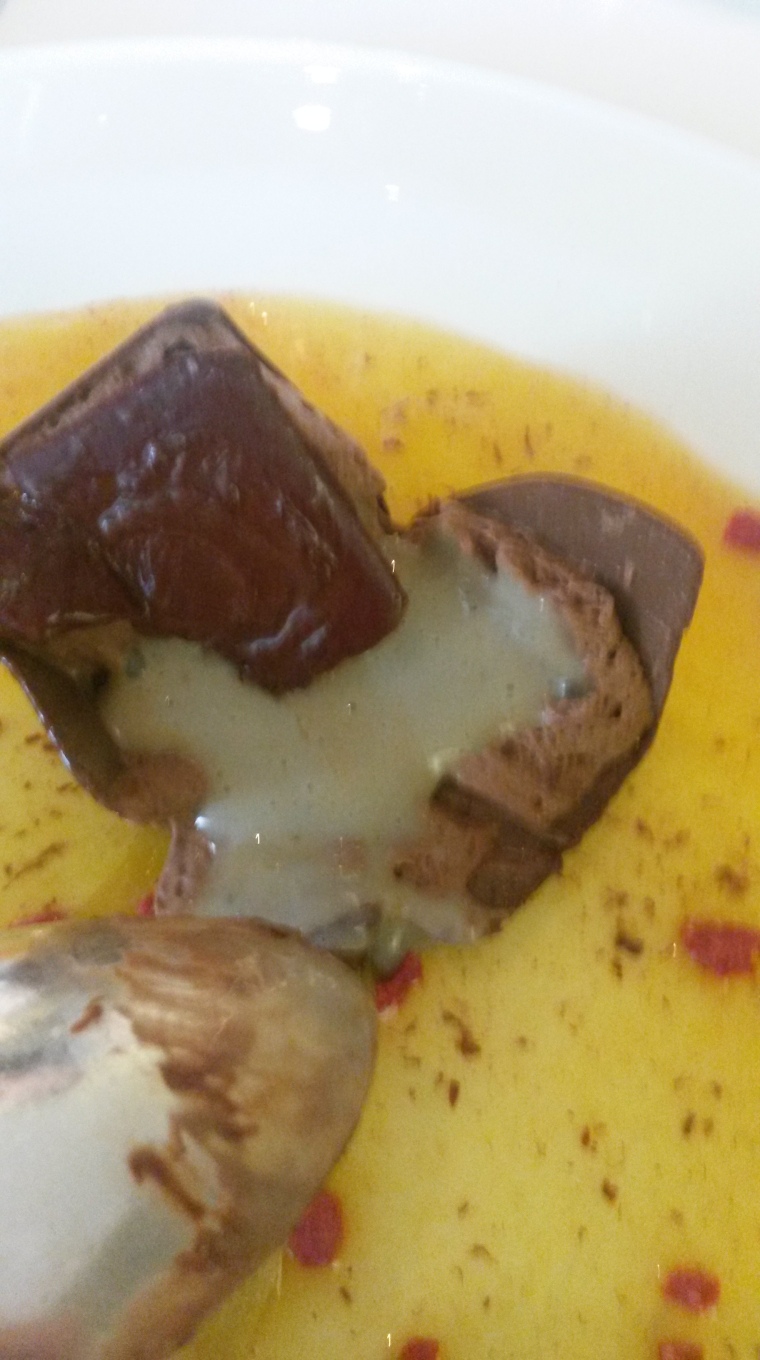 A final, celebratory glass of fizz and we settled in for some coffees and petit fours. It will not surprise you to learn these were not just any set of petit fours. Chocolate liqueur treats arrived on a bed of cereal-esque straw in a fabulous bird cage! 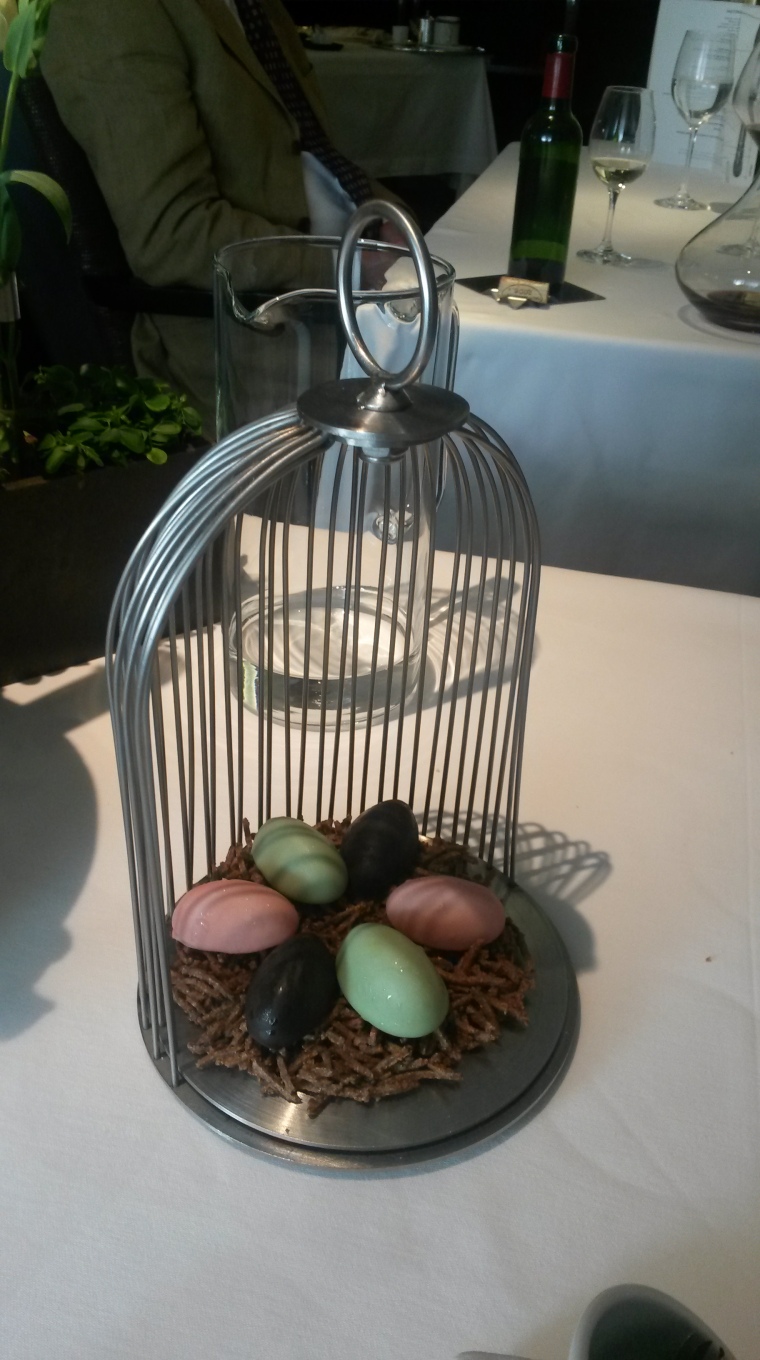 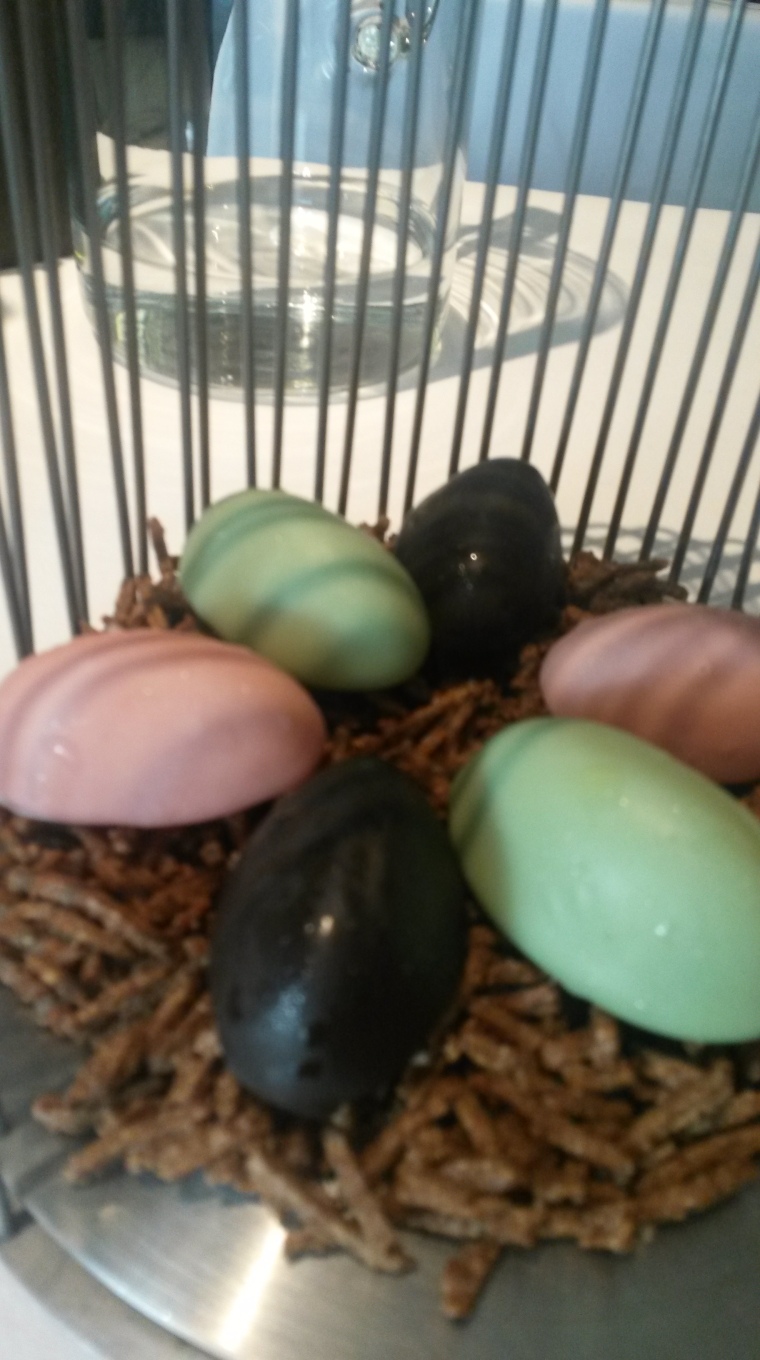 Our Arzak experience was complete. The menu was absolutely incredible and kept us guessing until the very last second. There was so much to see, taste, smell and even hear, I have never had a fuller, more enjoyable dining experience. The atmosphere was laid back and relaxed, yet it still felt like a very special occasion – I can see why this place is listed at no.17 in the top 50 restaurants in the world. These guys have nailed it, and the €195pp price tag (not including drinks) was worth every, single penny.

Rainy day 💙
❤️ C U T I E • P I E ❤️
A little poem for all the new mummies and daddies 🎅🏼🥰 #firstchristmas #feelingfestive
Sleepy snowman ⛄️
Strolling around 🍁🍂
Follow Fizz and Pheasant on WordPress.com